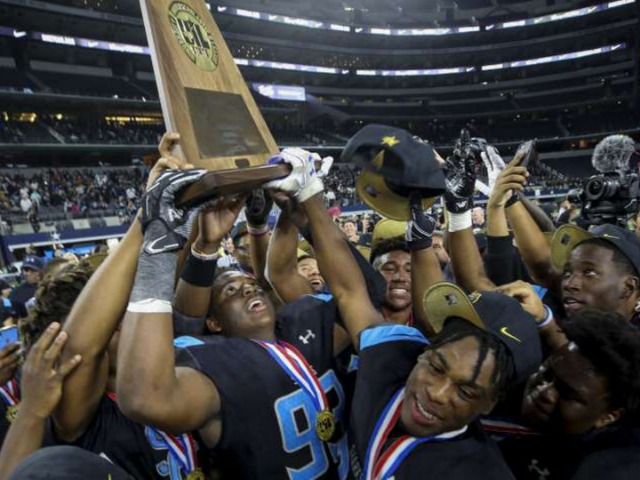 Shadow Creek head coach Brad Butler was walking off the field after the madness surrounding the 28-22 win over Denton Ryan when he was notified where Jamarian George was standing in the lower bowl of AT&T Stadium on Friday.

Their eyes met and they exchanged wide smiles and fist pumps. George took the leap as this program's first quarterback. He helped the Sharks in their 2018 UIL varsity debut, spurring the team to 15-1 with a state runner-up trophy thanks to Highland Park.

The Sharks ended up as the ones dishing out the lumps. In fact, they've done it for two consecutive years now. And the ultimate piece of validation is the Class 5A Division I state championship trophy in a second try in as many years.

Shadow Creek's win makes it 31-1 in its first two years as a program and Friday's championship - a perfect ending with the school's athletics programs moving to Class 6A next year - can open the question if any program can or will ever match Shadow Creek as far as debuts are concerned.

“Last year nobody really thought we were able to get to this and then we were all just shook in the moment,” said Shadow Creek quarterback Kyron Drones. “This year we knew what it took to get here and we all bought in as a family and we just had to get the win this time.”

The ultimate nods go out to Lubbock Estacado's 1968 team and Beaumont West Brook's 1982 side. They also did what Shadow Creek couldn't do last year with a state championship in its debut year in UIL varsity play. Sixteen more wins and attaining the ultimate prize puts Shadow Creek in a different perspective, though.

Players on Shadow Creek's deep roster have been spending the last two years essentially picking who was going to be hero for the game. Perhaps it's Randy Masters for this one.

A punt sailed into the end zone past Ryan's Riley Nozzo, who kicked the ball 9 yards without picking it up in an effort to save the play.

Masters, however, had the heads up to pick the ball up and take it back for a 37-yard touchdown. A penalty flag was thrown for illegal kicking, which was declined so Masters' score was upheld.

Shadow Creek took a 14-8 lead into halftime because of that moment.

Drones, the game's Offensive MVP, could be considered the catalyst for this win, too. Ryan stud and highly recruited Billy Bowman Jr. made sure Drones felt his presence with two first-half interceptions. But Drones' pocket awareness against Ryan's pass rush was helpful. He finished with 135 yards rushing and two touchdowns. He mastered a 10-play, 92-yard drive boosted by his big 28-yard pass to CJ Guidry and ending with his 1-yard touchdown run for a 21-8 lead to open the third quarter. His big 55-yard run in the fourth quarter, which led to Kelvon Brown's 8-yard score with three minutes remaining in the game felt like the game-sealer.

Maybe the hero is a familiar one in senior linebacker Jeremiah Harris. He tallied 5.5 tackles, one for a loss and two sacks on Friday. He earned Defensive Player of the Game and was a major reason Shadow Creek was able to bottle a Ryan offense that had 57 total yards at the half and 250 by the night's end.

"We knew a lot about perseverance and pushing through because we've come back from 21-point deficits in the regular season," said Harris, with those district battles against Foster coming to mind. "We knew what that was about. We never once felt like we were going to lose this game."

Ryan certainly tested that theory, even with a 21-8 deficit at the start of the third quarter.

Drew Sanders' 2-yard run with 3:24 remaining in the third quarter was Ryan's first offensive touchdown of the game and cut the deficit to 21-15.

Ryan continued to apply the pressure in the final frame. Ryan's Dorian Anderson came up with a fumble recovery at the Shadow Creek 39-yard line, giving a team that seemed to find its footing in the second half a chance to take a mid-fourth quarter lead.

There was that Shadow Creek defense again, though. Ryan's drive stalled at the 23-yard line on a fourth-and-9 pass defended by Chanceller Byers, another hero from last week's state semifinal.

Ryan had one more chance to break hearts with a late drive into Shadow Creek territory thanks to a pass interference call. Seth Henigan's lob toward the end zone with two seconds remaining was nearly caught by Sanders and would've given all of AT&T Stadium flashbacks of North Shore-Duncanville in 2018.

History fell on Shadow Creek's side on that play, much like it has for two years. 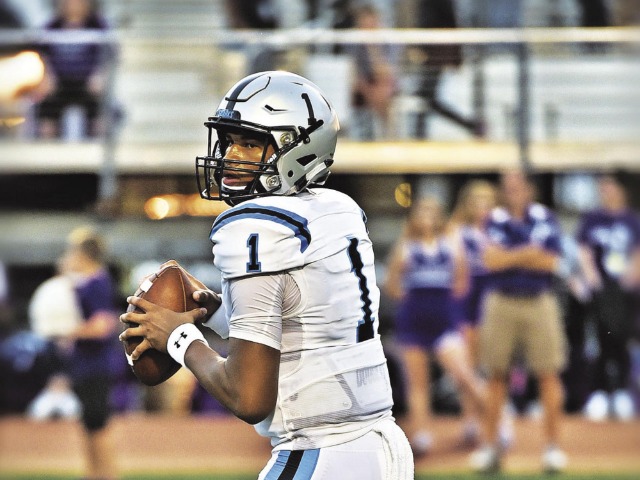 DRONES NAMED MOST VALUABLE PLAYER IN 10-5A 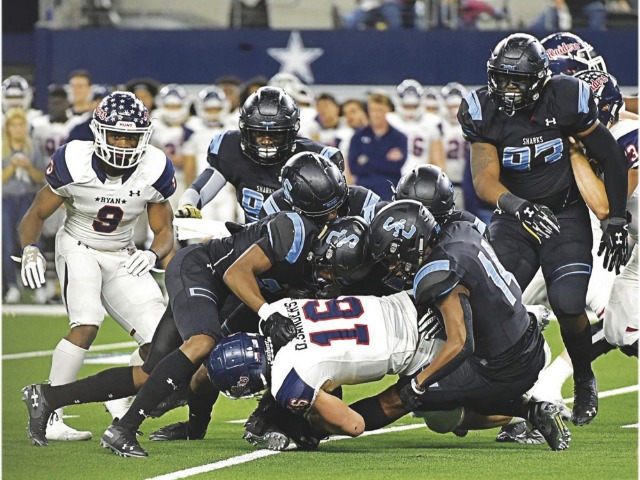 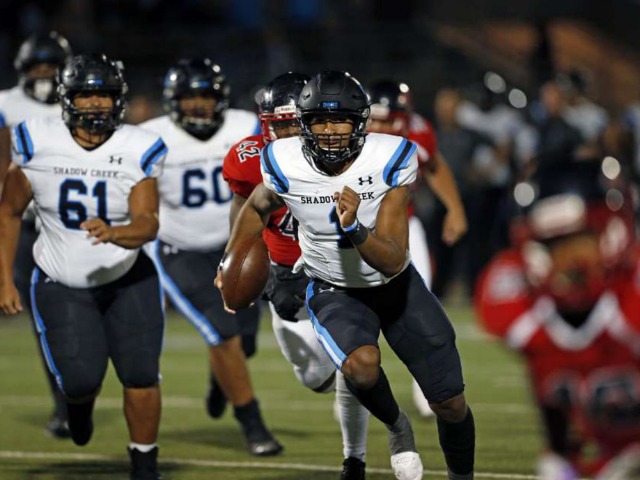